I've got news - I joined a coaching group in Portland: Wenzel Coaching.

Check out my coaching profile here.

If you want to take your fitness to the next level, let's talk!
Posted by andrew at 2:47 PM No comments:

So we've had several road races here in Oregon:

All of these have been tough races, mostly due to the strength of the fields. Fortunately, my team has been doing pretty well in most of them. My teammate Dwayne (listed in the results as US Military Cycling) is a climbing freak and teammate Kyle is super strong. So I have been doing lots of work to get them set up for some good results.

Some highlights so far:

Gorge Roubaix (See some photos here, here, here, and here) was one of the toughest and yet scenic races i've ever done. Day 1 featured miles of gravel and climbing plus some rain, wind and hail. Day 2 was similar minus the rain. I flatted after the gravel section on lap 1 of day 1, but was able to chase back into the group. I got dropped on the climb just before the final gravel stretch on the last lap. which made for a long ride into the finish with a headwind. Dwayne took 2nd both days. Day 2 I wasn't feeling very well. The race shattered up the first major climb and gravel section, and I ended up in the 2nd group on the road. Both days were awesome though. And the scenery was amazing (check out those pictures!)

King's Valley was a return to rural roads that I first started riding on at Oregon State University. (In fact, the first road ride i did with OSU racers was on part of this course!) Kyle won this race last year and was focusing on defending it. When he got into a breakaway with most of the other large teams in it, we focused on marking bridge attempts and keeping the pace steady. Kyle did his part and pulled off the win!

Racing here has been really fun. Not only are the riders out here super strong, but they are all super good bike drivers as well. I don't think there has been a single crash in a race that I have been to.
Posted by andrew at 12:33 PM No comments:

I moved to Portland
I joined a team
I raced a lot of cross
It was hard
We had training camp
I got a power meter...

And now it is road season! Hope to be a little better about keeping things up to date!
Posted by andrew at 6:51 PM No comments:

It has finally transitioned to springish weather. After a very long CX season and then winter that lasted well into April, I've finally gotten the road season underway and have gotten my legs back underneath me.

This is my final racing season in the Kansas City area. In June we will be moving to Portland OR, for residency. I am looking forward to many things there, but the road and CX scene have me particularly excited.

As far as this road season has gone, I've been super happy with how it has turned out. I came in with lower fitness than I am used to (I only did about 60% of the mileage in March 2013 than March 2012) But it has been very fun to race on a full team of 1/2's who are local. It has been very fun to go into each race knowing that we have the guys to form the outcome of the race.

It was also fun to try some staples of the KC racing scene that I had never done before. I have never gone to the Spring Fling series or the Perry series, so it was nice to get out to those before moving.

Bazaar was sort of fun, and GP Velotek was a great way to get in an early stage race prior to Joe Martin. Both those races have historical issues with getting results done in a timely manner, and this year was no different. I think this should be the number one issue addressed by the KCA. If the Kansas races are to be taken seriously and draw regional racers, we can't expect to make them wait around for hours afterwards to get results up. Even for local racers, the fact that I reminded my team before each of the races to bring plenty of food and drink and warm clothes for afterwards means that these races are getting a reputation for slowness and inaccuracy. But I digress.

The team is right now down in Fayetteville AR, racing at the Joe Martin SR. I came into the race unsure how far my fitness was going to take me. The Thursday TT was a pleasant surprise as I bettered my old time by more than 30 seconds for the course. This put me at 25th/110 starters. Brian West put in the ride of the day and placed 9th.

Friday's RR was fairly calm until a wild crash at mile 50 that took out Michael Smith and scattered riders across the entire road. The pace calmed down a little bit after this and stayed mostly together until the base of Mt Gaylor. The tempo up that climb was steady, which was good because Brian West had flatted just before and was able to catch back on as the climb ended. 7 riders ended up getting away and at the end of the day we finished in a group with Brian, David Neidenger, Justin Leopold and I making the selection in the main bunch. This moved me to 22nd on GC.

The Saturday RR, though shorter than Fridays, is tougher because of the repeated laps up two tough climbs. The pace was high immediately in this race and I was a little ragged after the first time up the climbs. A group of 4 got away, and by the end of the first lap they already had over 2 minutes to the field. I joined a chase group that jumped out of the bunch on the second time up the climb, which I think was the right move, though we didn't make any time on the leaders. Fortunately our group took the climbs a little conservative and I was able to just ride tempo with the group. On the third lap, after the climb the main bunch caught up with us. Brian and I were up there and we rolled in with the main group, several minutes down on the leaders. That dropped Brian a couple of GC spots, and me back to 23rd.

No shots of me in here, but this is what the course was like for my race. I had a little bit of a slow start compounded by crashing on some ice later on lap 1 that set me back.
Posted by andrew at 9:27 AM No comments:

In case you missed it...

I think everyone has seen this by now, but if you were hiding off the grid all weekend...

We are in the swing of cross season, and i've been too busy to write up any race reports.

Here is a summary of what has happened:

Hermann CX. I came into the season still working to develop my high end. This showed as I was not able to go deep in this race, and nearly blew up just trying to ride with the leaders 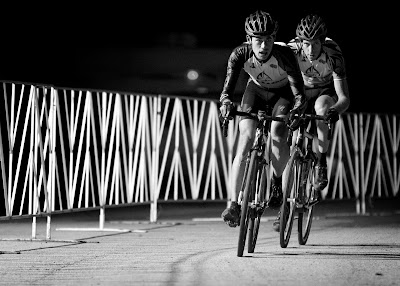 Boss Cross 2. I was travelling the week before and came back to jump in this race. It would have been nice to be a little more prepared as it was a good race up front. I missed out by botching the sand on the first lap and ended up having to play catch up. Again, the legs just weren't there 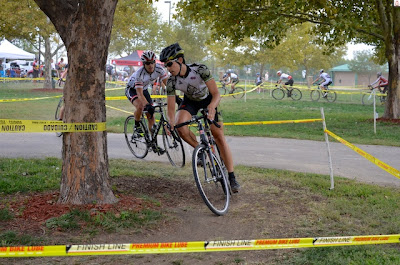 360 Cup. Definitely rode better, definitely had a crappy start both days. Not sure where my start legs went, but they have not been doing me well. Fortunately, I was able to do negative splits for the first 6 laps on both days and get 2nd. 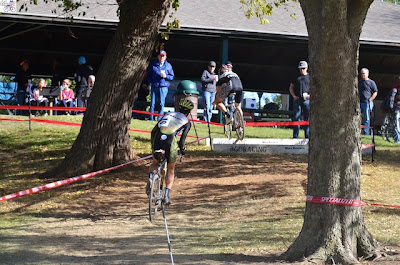 Cross Out Cancer. I finally had a good start and moved into the lead of the race only to immediately roll my rear tire and crash hard on the first lap to give everyone a minute on me. Then I rolled to the pit and got my Crux, then I got after it. Caught the leaders with only a little bit left to race and came out 2nd. The legs are coming back! 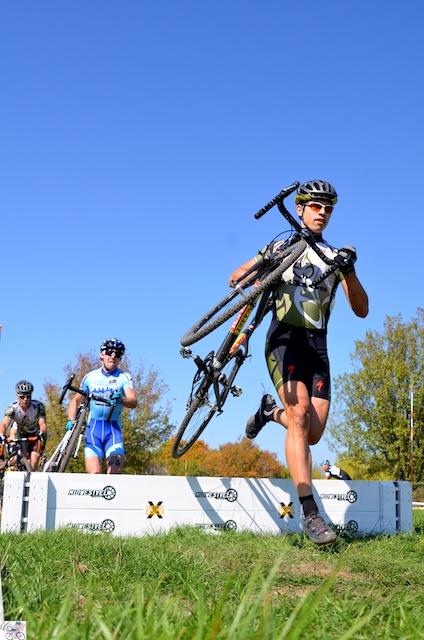 Posted by andrew at 2:48 PM No comments: